One promising option that could provide additional clean and renewable power – without waste disposal issues – is the exploitation of the natural phenomena of the ocean, such as waves, wind, currents. Offshore winds are often much stronger and steadier than winds on the land. Floating offshore wind turbines (FOWT) are now being deployed at water depths greater than 50 meters.

The ocean’s hydrokinetic energy potential through waves and currents presents opportunities around the world to provide power to remote locations, or even to cities through large-scale “farm” implementations. Existing ocean energy conversion systems, however, are far less cost efficient than traditional fossil fuel-based power plants.

Renewable energy sources generally provide power at higher costs than fossil fuel-based power generation plants for many reasons, but several issues play larger roles: consistency of supply, volume of supply, and proximity of supply to consumption sources. With advancements in technology and new paradigms in design, these problems could be reduced.

Advancements could come through the integration of several types of renewable ocean energy sources into one single ocean energy station. Additionally, if this synergetic and multi-source station were to be made mobile, it could meet specific demand as it is requested, or it could be used by the U.S. armed forces to provide energy for a foreign remote location or a mobile offshore military base. 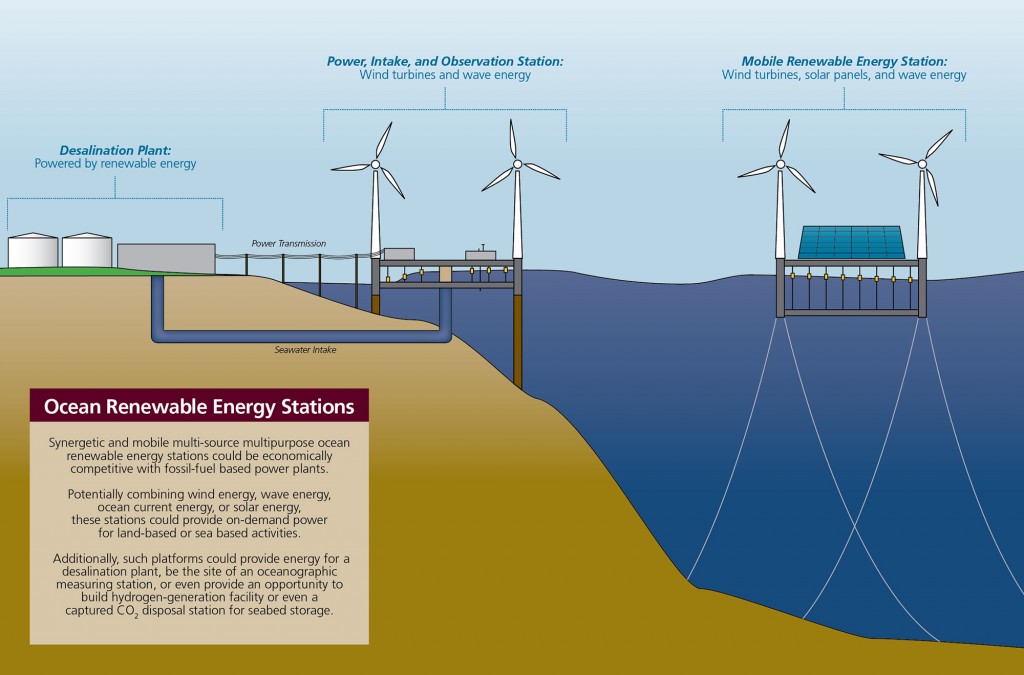 The project will capitalize on Texas A&M’s existing wind and wave energy research facilities, which include the Offshore Technology Research Center (OTRC) and the Haynes Coastal Engineering Laboratory’s three-dimensional multidirectional wave tanks. The Ocean Engineering Program at Texas A&M University has been involved in the design and testing of offshore oil platforms for more than four decades. Faculty members have strong experience in modeling of the dynamics and stability of floating structures, mooring and anchor systems in harsh marine environments. In addition, Kim has developed the most advanced FOWT and wave energy converter (WEC) computer-based simulation programs in the world.

Combining the broad knowledge and experience within the team, Kim will lead the development of a synergistic and mobile FOWT platform with an innovative WEC system.

The WEC will incorporate a smart material that will actively respond to changes in wave height or frequency. As the waves fluctuate, the smart material – using computer control – will respond differently and allow for  more consistent power production, even with calmer seas.

Kim will be responsible for modeling the interactions between the waves, the platform, turbine(s), mooring, and the anchoring for the global performance simulation. Chang will conduct small-scale laboratory model tests at the Ocean Engineering Wave Tank, a glass walled 2D wave tank that is 115 feet long, three feet wide and four feet deep. Kameoka will be responsible for developing and fabricating the simplified smart material of the WEC, and Kaihatu will be responsible for wave and wind characterization, modeling, and forecasting.

Broader Applications in the Future

In the future, this research could be expanded for other purposes, further broadening the spectrum of future applications.

Adding ocean current energy collection or solar energy collection could provide additional generation options for the platform. A hydrogen factory could also be incorporated, potentially useful for future hydrogen fuel cell cars, and the hydrogen could be drawn from the ocean water.

Coupling a platform with a land-based desalination plant could provide another strong partnership, where wave energy can provide the needed continuous pumping action to send the highly pressured water flow to the land for processing.

The platform could also be used as a captured CO2 disposal station, allowing for the injection of CO2 into the porous sand layer beneath the seafloor. Finally, an oceanographic measuring station could be added, providing space for wind, wave, current, salinity, temperature, and other observations.

A multi-source station could provide a near-constant supply of electricity, greatly enhancing the commercial value of the entire station. During a period of very low wind, wind turbines might not be able to generate enough electricity to meet demand, but other sources on the station – such as wave, current, or solar – could compensate.

In the future, these clean energy resources present new unique and mutually beneficial ways creating and using clean power – through the natural phenomena of the ocean.