"Domestication of Microalgae – From Natural Diversity to Synthetic Biology"

For thousands of years, the natural diversity of physical characteristics and traits in plant and animal species has allowed humans to selectively isolate desirable features for exploitation. In both plants and animals, extended periods of selection can lead to domestication, where a relatively consistent slate of characteristics is present.

In crops such as corn, the selection of desirable characteristics through genetic evaluations and breeding have led to crops that remain appealing to consumers, yet have high tolerances for a range of environmental conditions. The application of these techniques to a wide variety of plants has led to a transformation of crops and harvests around the world.

Research like this, however, is at its infancy for single‐celled eukaryotic energy organisms like microalgae. Able to produce more biofuel feedstock per acre than any other photosynthetic organism because of their high oil content, algae-based biofuels can be used for transportation needs and are biodegradable. Additionally algae production facilities can be located in a variety of locations that are not used for food production.

However, microalgae is not currently competitive as a biofuel feedstock, partly because of overall low productivity and difficulty in scaling up production from small lab-scale cultures. Short-term laboratory experiments with optimal conditions indicate that cost-competitive results are possible, but in real-world applications, this efficiency is not often achieved.

To overcome this, algal strains must be generated that can adapt or be suited for varying light conditions, salinity levels, temperature peaks or averages, and the presence of or lack of a competitive landscape. 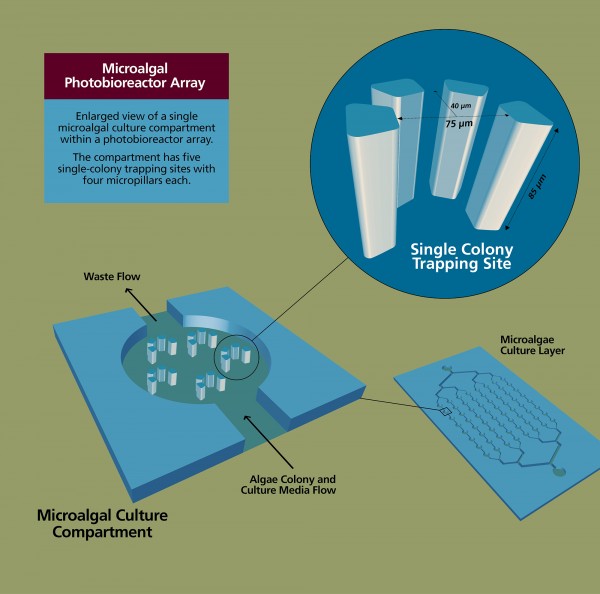 Dr. Arum Han, an associate professor in the Department of Electrical and Computer Engineering, together with Dr. Timothy Devarenne, an associate professor in the Department of Biochemistry and Biophysics, is working to develop an algal domestication program – a true paradigm shift in the biofuels area. If this “algal breeding” is successful, it has the potential to make microalgal biofuels cost-competitive as an alternative energy source. He and his multidisciplinary team will capitalize on natural diversity to evolve, or domesticate, single-cell green microalgae – using high‐throughput engineering innovations – into domesticated biofuel feedstock producers that are tailored to particular environments.

Unlike previous methods, this research will be accelerated by Han’s high-throughput engineering innovations, specifically, custom microfluidic screening devices. These devices, or chips, are similar to miniature plumbing systems that allow for manipulation, control, and characterization of millions of cells individually with single-cell resolution control. The single cells showing the most promising traits can be isolated, manipulated, and analyzed in very short periods of time using such microsystems, greatly reducing overall project durations and costs.

For Han’s project, the microfluidic devices will be used for two main purposes: facilitate a genome-to-phenome mapping approach and enable directed evolution-on-a-chip.

The genome‐to‐phenome mapping approach involves independently identifying the genomes of individual microalgal strains, then identifying the individual physical characteristics, or phenome, of that same strain. Taking dozens of strains from across the world, each are tested under culture conditions such as light, temperature, salinity, and nutrients. With a high number of options and combinations to test, this can only be reviewed efficiently with high-throughput microfluidics analysis. 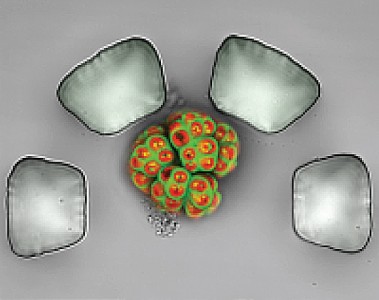 Han and his group recently developed a microfluidic photobioreactor array capable of high‐throughput analysis of microalgal growth and oil accumulation with the ability to provide 64 different culture conditions on a single chip. For this project, he will design and develop a modified platform, which integrates droplet microfluidics, capable of testing up to 1,000 culture conditions at a time.

Using the observations and knowledge gained in the genome-to-phenome analysis, microfluidic devices will be designed to direct the evolution of strains for specific tolerances or characteristics. The microfluidic devices will allow single cells to be tested under increasing levels of stress from radiation, temperature levels, or salinity levels. Particular strains will be identified, sorted, and then reintroduced into the culture chamber for increasing levels of stress to be applied until desired characteristics are consistently achieved.

Through this evolution, tailored strains to address numerous stress scenarios could be created, potentially producing “winter” and “summer” variations, or strains that can grow in brackish water or even salt water. Ideally, a library of strains will be created to suit a wide array of implementations.

The diverse team will represent three universities and one national laboratory. Including an electrical engineer, microalgal molecular biologists, a genomics and phenomics expert, and a microagal biofuels expert, the team brings a broad base of experience and the promise of success in a new area.