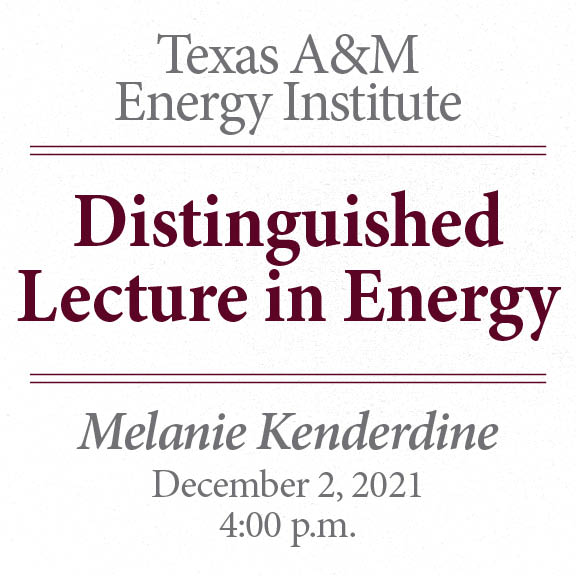 On Thursday, December 2, 2021, from 4:00 p.m. – 5:00 p.m. CST (GMT -6:00) in the Forum at the Rudder Theatre Complex on the campus of Texas A&M University, the Texas A&M Energy Institute will host a Distinguished Lecture in Energy by Melanie Kenderdine, a Principal and Executive Vice President of Energy Futures Initiative. The topic will be “Gigaton Problems, Gigaton Needs: The Urgency of Addressing Climate Change.” Climate distress signals are everywhere. The Texas big freeze cost $130 billion and 110 lives, while wildfires and hurricanes have ravaged California and the East Coast. 2020 was the second hottest year on record.

These and a range of associated issues will be discussed in Ms. Kenderdine’s lecture, “Gigaton Problems, Gigaton Needs: The Urgency of Addressing Climate Change.”

Kenderdine worked in the Administration of President Barack Obama at the Department of Energy (DOE) from May 2013–January 2017. She served concurrently as Energy Counselor to the Secretary and as the Director of DOE’s Office of Energy Policy and Systems Analysis. Her 100-person office was responsible for analysis and policy development in areas that included DOE’s role in the annual review of the Renewable Fuel Standard Program requirements, energy innovation, and climate change. Her office produced two installments of the Quadrennial Energy Review and helped conceive and develop the Energy Security Principles adopted by G-7 leaders in 2014. In her capacity as Energy Counselor to the Secretary, Kenderdine helped create Mission Innovation, now a 24-country/European Union initiative that supports transformational clean energy RD&D; North American grid integration and security; and the modernization of the Strategic Petroleum Reserve.

Prior to her service at DOE, Kenderdine helped establish the MIT Energy Initiative (MITEI) and served there as Executive Director. During her six-year tenure at MITEI, she managed a large research and administrative staff, was a key contributor MIT’s Future of Natural Gas Study, the MITEI Symposium Report on Alternative Fuels and Vehicles, and edited the MIT Future of the Electric Grid study. Kenderdine also started the C3E Symposium series, a joint MIT-DOE program to support the careers of women in clean energy with cash prizes; she still serves as a DOE C3E Ambassador.

Before joining MITEI, she was Vice President of Washington Operations for the Gas Technology Institute (GTI) from 2001 to 2007. While at GTI, Kenderdine established a separate not-for-profit company, the Research Partnership to Secure Energy for America (RPSEA). As RPSEA’s first CEO, she transformed it from an MOU between GTI and one university, to an industry/academic unconventional natural gas research consortium of 26 universities and 30 industry partners. Concurrently, she was a key architect of the Royalty Trust Fund, the only federal trust fund dedicated to energy R&D.

From 1993 to 2001, Kenderdine was an appointee in President Bill Clinton’s administration, where she served in several key posts at DOE, including Senior Policy Advisor to the Secretary, Bill Richardson, Director of the Office of Policy, and Deputy Assistant Secretary for Congressional and Intergovernmental Affairs. She was a primary architect of the SPR oil exchange of 2000, the creation of the Northeast Home Heating Oil Reserve, and the return of the Naval Oil Shale Reserve No. 2 to the Ute tribe in Utah, the largest land transfer back to Native Americans in the lower 48 in over 100 years. Prior to joining DOE, Kenderdine was Chief of Staff and Legislative Director for then-New Mexico Congressman Richardson.

She is a graduate of the University of New Mexico, has homes in New Mexico and Hawaii, and is an avid global traveler and enthusiast of fly fishing.